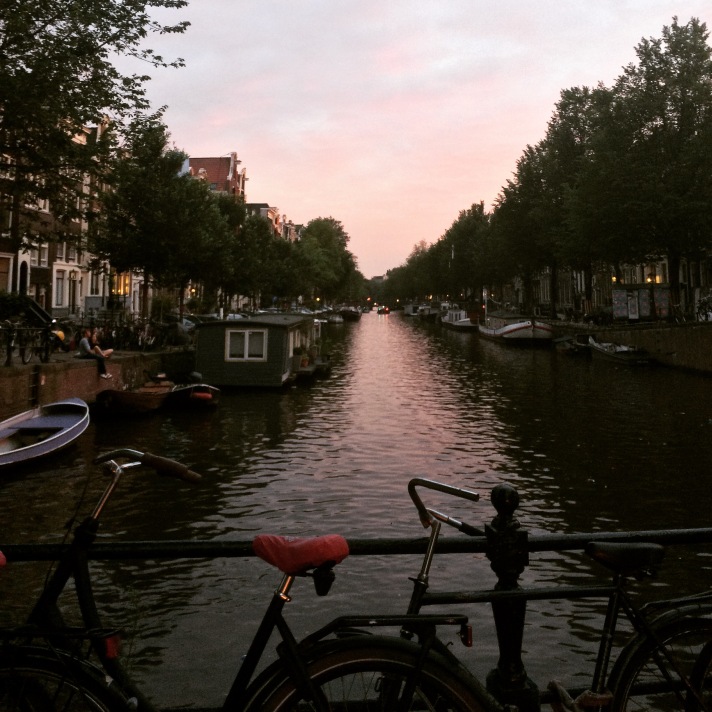 Landing in Paris one week ago was a little overwhelming to say the least. I was extremely lucky to be traveling with Tessa Rager, a great friend and classmate. She and I know very minimal French, so awkward miscommunication was becoming part of our daily experience. More so than anything else, I experienced an overwhelming feeling that I had made the right decision. As we moved further and further away from the airport in Paris on the train ride to Angers, this feeling got much stronger. I stared out the window observing all that I could about my new environment.

One aspect of my new environment that I noticed right away was how many farms were outside the city of Paris. It was significant in my mind because this was a sign that food is grown locally here. The French stereotype that they care for their food was soon obvious to me after a few meals. The ingredients are certainly fresh and delicious. After settling into Angers, Tessa and I decided to make some loose plans to travel to Belgium and the Netherlands before classes start here. What we discovered was unexpected, eye-opening, and thought-provoking.

I normally do not like to generalize about any one group of people, or assume any stereotypes because I do not think they are fair. I personally do not fit into many stereotypes, and nature is full of anomalies. This makes me hate generalizing even more because it does not tell the whole story of an individual or community.

While at a lounge/bar in Amsterdam, Tessa and I were enjoying ourselves over a drink after a long few days of travel. We could not help but overhear the conversation happening at the next table between a British woman, an Australian woman, and man (possibly from the Netherlands), all of whom were about my age. The topic: Americans. Naturally, Tessa and I were interested in hearing what they had to say about us. At first, they seemed to be kind of ignorant as to what they were saying, making comments like “Americans are disgusting,” without making any real arguments to back this up (looking back, I wonder if they were intentionally trying to provoke us). The conversation soon switched to the topic of food in the United States, specifically factory farming animals for meat production. This peaked our interest since both Tessa and I are studying food systems in the United States and elsewhere.

The women and man started by talking about the harsh conditions our animals endure before we eat them. The British woman exclaimed “If they (Americans) are going to kill the animal for food, why do they have to torture the animal beforehand?” I couldn’t help but agree with her in my head. The Australian woman then referred to legislation in the United stated that makes it illegal for people to expose the terrible treatment of the animals in factory farms. The first of these “Ag Gag” laws were passed in Utah and Iowa in 2012, making it nearly impossible for whistleblowing to occur on farms. This is extremely significant because many of us do not know about the truly awful conditions the cows, chickens, and pigs endure before they are killed for consumption. I understand the issue that the Australian woman was trying to articulate. With laws like these on the books, large agricultural businesses have essentially silenced farmers in an attempt to keep the masses ignorant to this moral issue. Right after this comment, the Australian girl continued with her rant. She said that “American’s don’t deserve the meat we eat,” and that “we don’t need it.” Granted veganism and vegetarianism are perfectly plausible options for the human diet, but to say that Americans do not deserve to eat meat is implying a sense of disrespect and hatred of Americans or the American lifestyle. This part of the conversation made me very uncomfortable and I am still not totally sure why I felt this way. It is possible I was analyzing the situation a little too much, but maybe she was trying to say that we could easily eat less meat, which is an idea I do agree with because we do not need as much animal protein as we think we do in the United States.

Now, to be completely honest, the people at the table next to Tessa and I did not seem to fully understand the issues they were discussing amongst themselves. This was fascinating and frustrating at the same time because Tessa really wanted to start a conversation about sustainable agriculture and the local food movement in parts of the United States to give them a better image of America. I was animate about not wanting to bother with them and convinced Tessa that it would not be worth the energy (we were exhausted from so much travel and I felt that it would only lead to a conflict). They also said some very offensive and provocative comments throughout their conversation, which gave me the impression that they were living in their own bubble, observing and traveling the world without researching any facts to back up their ideas. I felt my energy would be better put to work on a blog post about the issue, in hopes that my ideas will resonate further than their misguided opinions of all Americans. The Australian woman and the man also said that they buy organic, and the British woman said she was a vegetation, so they seemed pretty pleased with their life choices and had no problem looking down on the American population. The main problem I have with this train of thought is that it does not account for the price difference between non-organic food and organic food in the United States. If you are an average American, you shop at the grocery store when you are not working. The cheaper options are almost always worse for your health and almost certainly non-organic. This might not seem like a big deal at first, but it is a social justice issue because people with money can afford to be healthier than those without enough money for organic food in the United States. I do not think that the people talking next to us were aware of this issue.

To make such a sweeping generalization about an enormous country is irresponsible. The United States is full of people who do care about where their food comes from, how it is treated, and so on. At the same time, there are many of us who do not care. I truly do not think the people sitting next to us in that lounge were aware of the diversity of people in the United States. There is huge variation in opinions of people from state to state, even city to city when it comes to food. The sweeping generalization made by them was at best faulty logic. They did touch on some really critical issues of our time, but they certainly did not have the full picture to make such claims.

At the end of the day, I was very happy to be able to have the experience to hear what a group of people from other countries think of our food system and of us more generally. They frustrated Tessa and me so much because we know way more people who actually do care about their food than people who do not in the United States. I recognize now that we are not the majority, and this was hard to accept. The trend the United States seems to be heading towards a more food conscience society, which gives me hope that current agricultural practices could change drastically in my lifetime.